In case you haven’t noticed, Kia Motors isn’t what it used to be and it’s a good thing. Back in the old days of the late 1990s, Kia Motors was a cheap and cheerful upstart in Canada. It once even sported a tagline approximating, ‘why settle for a used car when you can have a Kia?’ Really.

To say circumstances have changed for Kia is the understatement of this new decade. From the first-ever high-performance Stinger gran turismo sedan and three-row Telluride SUV, to all-new versions of the Soul and Soul EV crossovers, the South Korean automaker now churns out new models that don’t need support from cheeky ad campaigns. These cars are good.

And Kia isn’t standing still either. An all-new Optima mid-size sedan will arrive later this year, the first-ever compact Seltos crossover is in dealers now, and the subject of this review, the new Forte5 compact hatch, arrived late last year as a 2020 model.

The Forte family has been around for a sneaky long time. Also known as the K3 in China and the Cerato in South America, the Forte debuted in 2009 and went on sale in North America in 2010. Back then, the family also included a two-door Koup variant, which lasted through the first two generations before being retired at the end of the 2016 model year.

All three generations of the Forte have been built on a front-wheel-drive platform shared with the Hyundai Elantra, with which the Forte also shares four-cylinder engines and transmissions.

The Forte sedan was all-new for the 2019 model year, while the Forte5 is new for 2020. Being part of the same generation, both cars share similar styling and feature the same powertrains and technology.

The base Forte5 EX is powered by a 2.0-litre 4-cylinder engine that produces 147 horsepower at 6,200 rpm and 132 lb-ft. at 4,500 rpm. The only transmission on offer is a CVT which Kia calls an intelligent variable transmission (IVT).

GT and GT Limited models receive a more powerful 1.6-litre turbocharged 4-cylinder that produces 201 horsepower at 6,000 rpm and 195 lb-ft. of torque at 1,500 – 4,500 rpm. Paired with this engine is a 7-speed dual-clutch automatic with steering-wheel-mounted paddle shifters.

The previous generation Forte5 aged well to the point that when it was retired last year the transition to the new car was seamless.

The third-gen car’s styling is an evolution of the previous car rather than a complete departure. In fact, from a distance, it’d be hard to tell which model is new if the two were parked side by side.

The corporate Tiger Nose grille is smaller, and the LED headlights look fresher on the new car, but the lines and general shape of the two don’t differ much. The bigger difference to these eyes is at the rear, where the new fascia, LED taillight graphics and dual exhaust finishers have a more upmarket feel than those on the outgoing model. 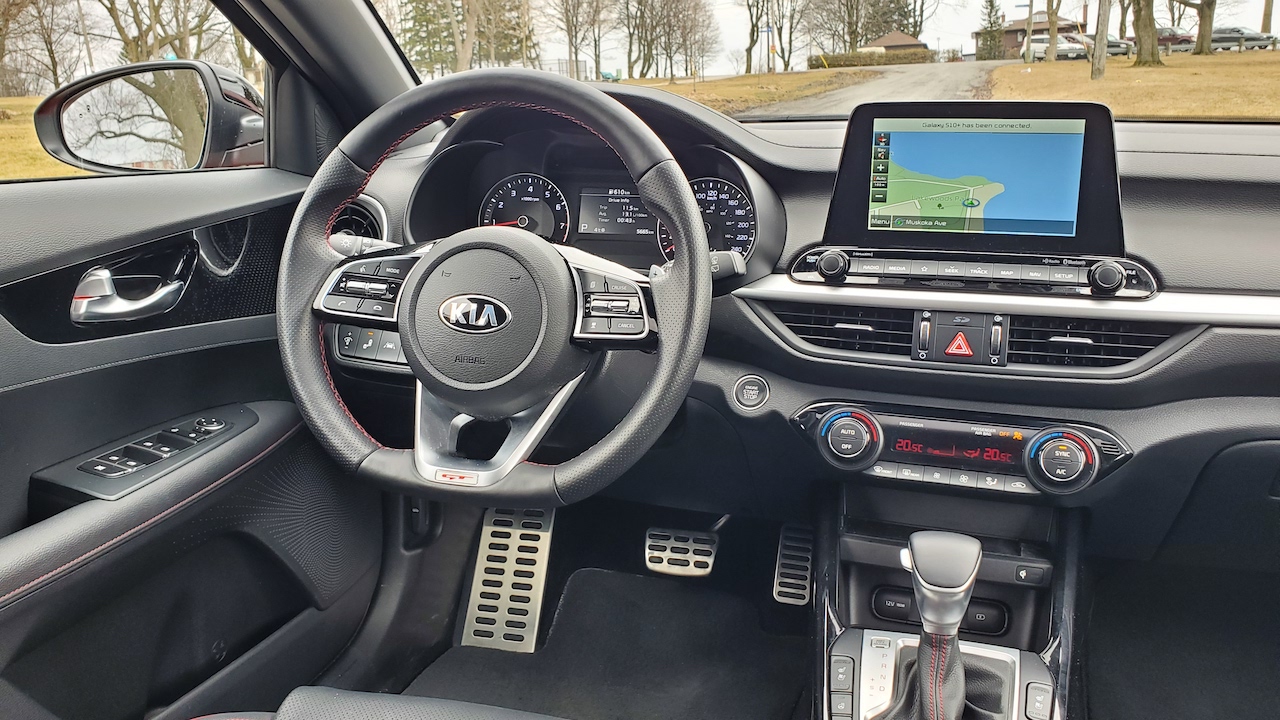 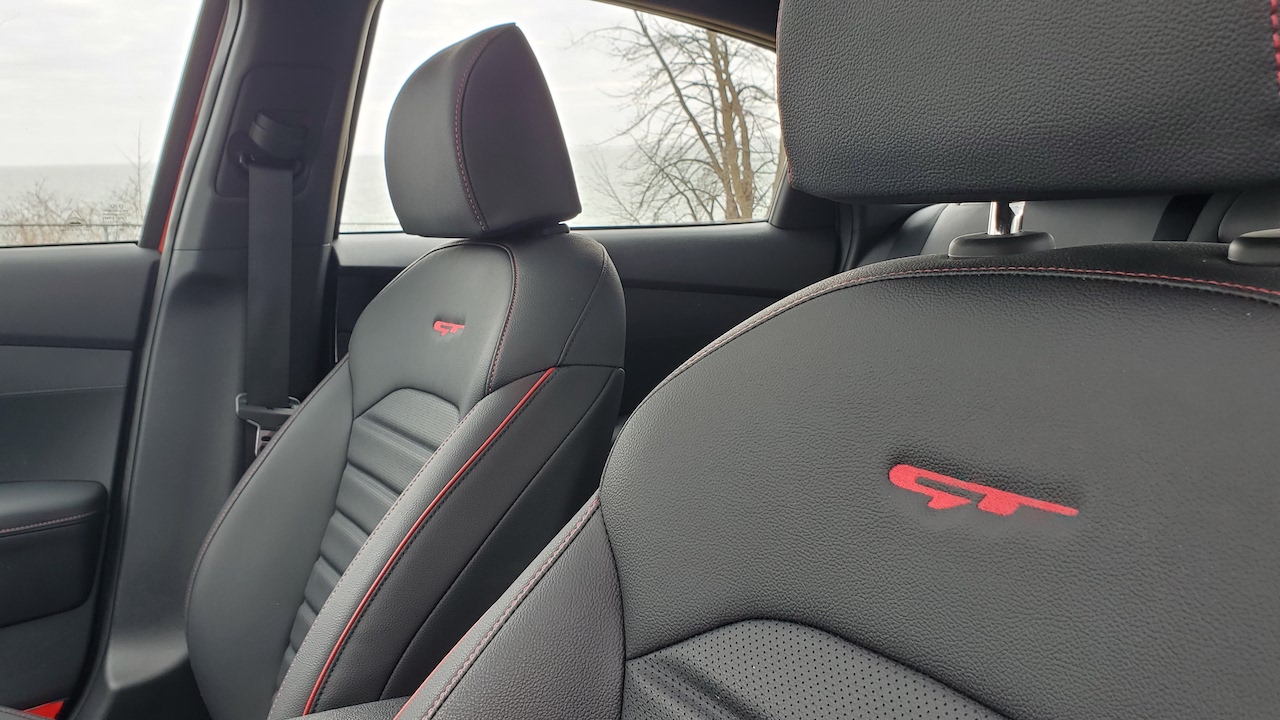 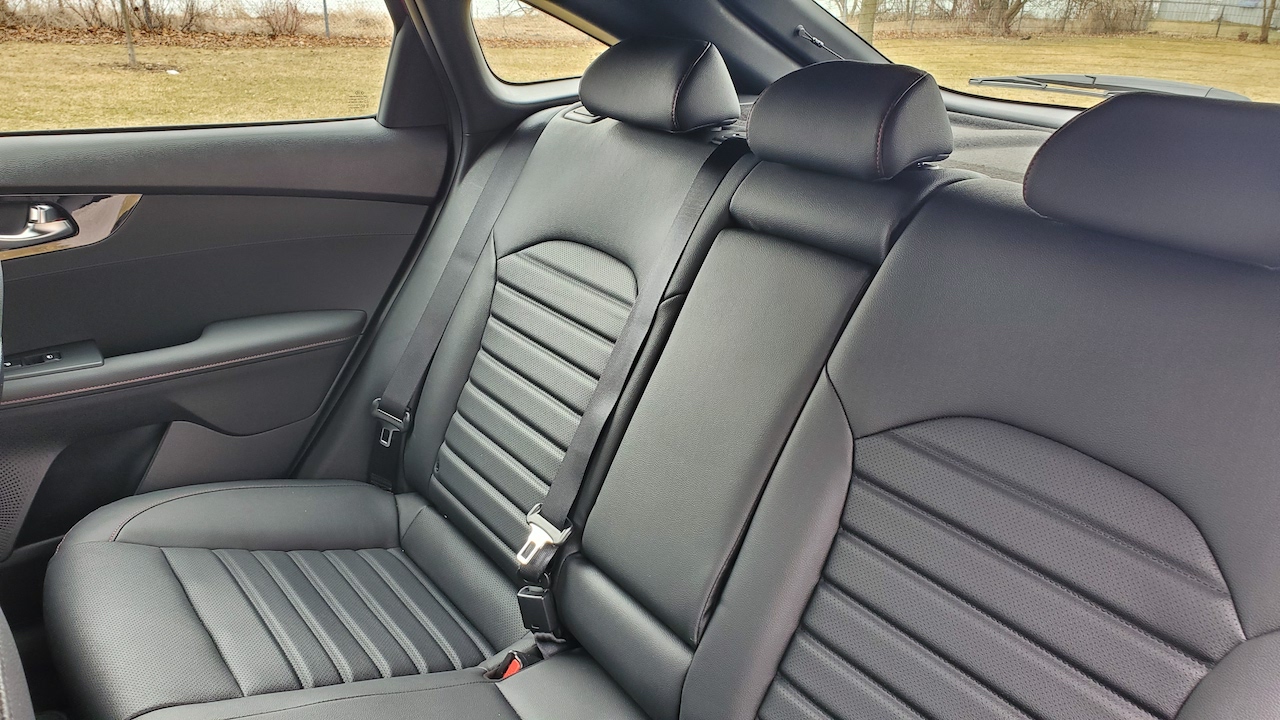 Inside, Kia has done a great job of shedding much of the econobox feel some small cars still suffer from. Granted, my GT Limited tester has the best of everything but, as mentioned, a lot of this stuff is standard on all models. The confines in the Forte5 are a bit tight for passengers (although cargo room is quite generous), but I am impressed with its appearance and materials used. Sure, there are some hard, plastic bits in the dash and on the door panels, but the primary touchpoints mostly look and feel great.

The pictures tell the story here, but I must mention how Kia continues to nail interior design. Everything is well laid out, buttons and switches are where you expect them to be and, unlike some other OEMs, they aren’t being moved around for no good reason. The UVO entertainment system works fine, but Kia has wisely chosen not to abandon hard keys in the centre stack and elsewhere, and all I can say is thank you.

Generally, the Forte5 GT Limited is an able performer in everyday driving conditions. Acceleration from the 1.6-litre turbo is spritely and hustles this compact hatch along just fine, both off the line and at speed. The 201 peak horsepower number is impressive for a compact car, but it doesn’t arrive until 6,000 rpm which makes accessing it in daily driving situations challenging unless you want to launch yourself by pinning the throttle at every stop sign or traffic light (not recommended). 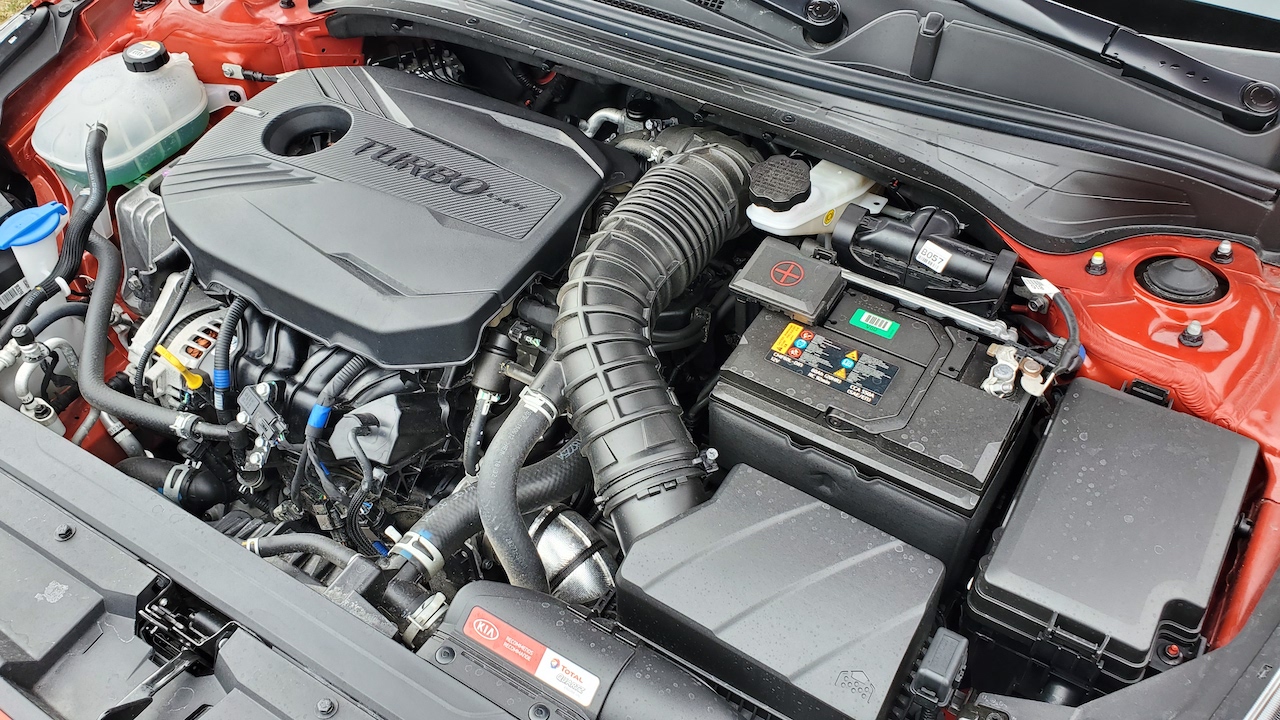 The good news is the torque curve is much flatter with peak twist starting at just 1,500 rpm, so some fun can be had by dialling the drive mode selector to sport (smart and comfort are also available) and toggling the gear shifter to manual mode to make use of the paddle shifters. Doing so doesn’t turn the Forte5 GT Limited into a sports car, but it gives this hatchback a more sporting character.

Bear in mind, these impressions are drawn from driving on winter tires on public roads. It’s difficult to fully evaluate a car’s performance without access to a closed course and better rubber (and nicer weather), but I can report that the Forte5 GT Limited’s handling feels responsive, with good steering feedback and minimal understeer in normal driving conditions. Road and wind noise are also well suppressed for a small car.

There’s a lot to like here. The Forte5 GT Limited is an impressive car that delivers what matters to buyers in this compact segment. It’s handsomely styled, comes packed with loads of standard comfort and safety features while offering good performance at a competitive price. 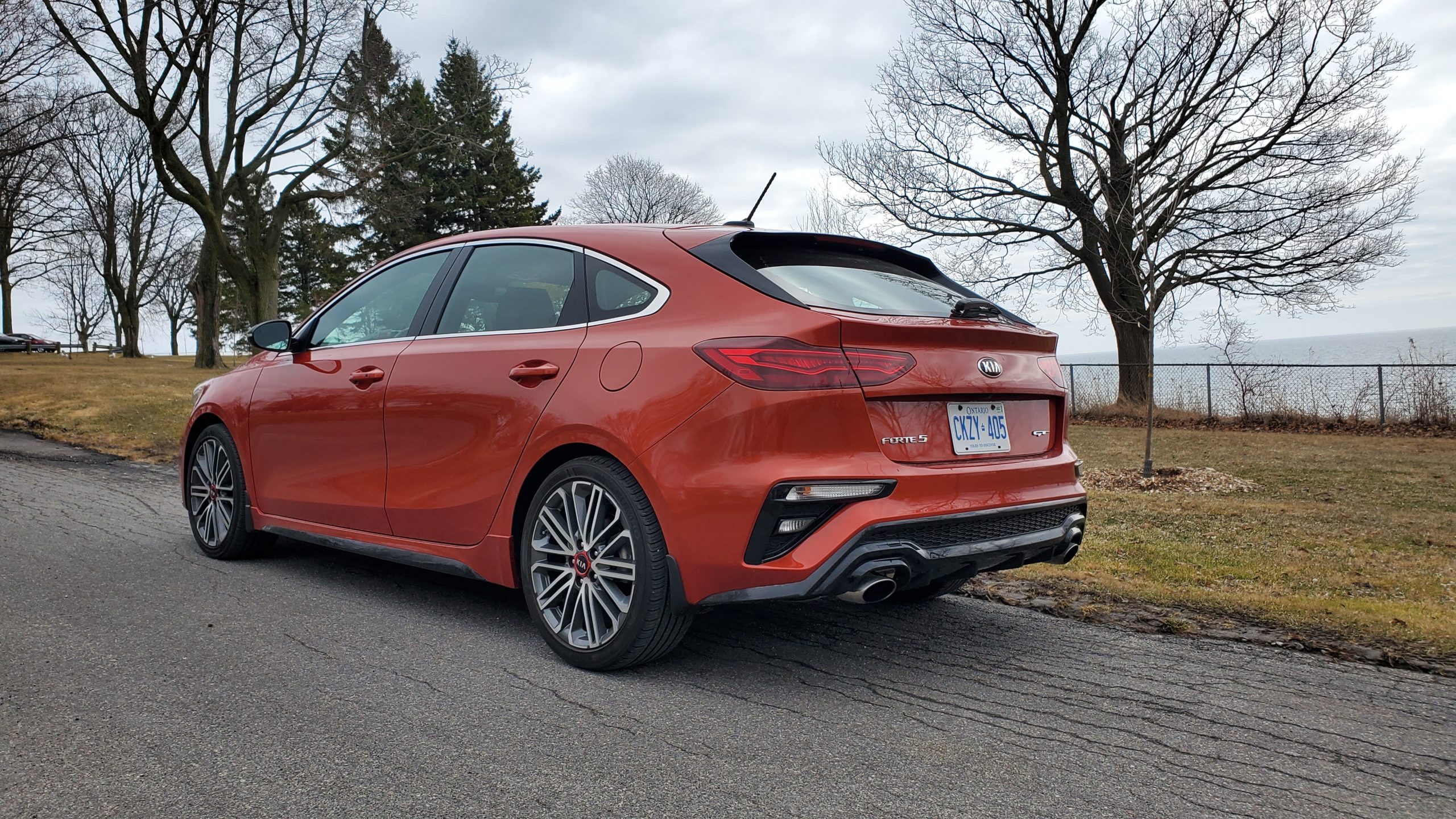 Kia makes a lot of great cars consumers should want for all the right reasons. The Forte5 GT Limited is just one example.